After the success reached by Gaudí, Editorial Mediterrània edits the second volume of the collection Pintem! aimed to the young audience in order to make them know in a more playful way the most emblematic buildings of the Catalan Modernism and the architects who designed them.

Five architects and nine buildings drawn by Pilarín Bayés. The collection wants to show the children the most important buildings and Modernist architects of our country in a more playful way through the drawings of the caricaturist Pilarín Bayés.

The selection of these emblematic buildings has been done according to its relevance. In this sense, by Antoni Gaudi there is the Sagrada Família, the Casa Batlló and the Pedrera; from Josep Puig i Cadafalch there is the Casa Ametller and the Fàbrica Casaramona; from Lluís Domènech i Montaner there is the Palau de la Música and the Hospital de Sant Pau; from Manuel Joaquim Raspall, the Can Xammar de Dalt and from Josep Maria Jujol the Torre de la Creu. 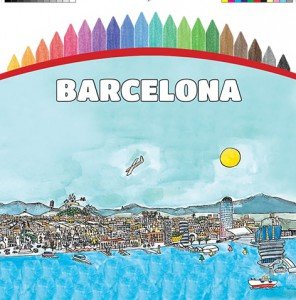